When to enumerate. If a contract provision contains two or three lengthy phrases or more than three list items, it is recommended to break the paragraph and create subparagraphs. A ‘lengthy phrase’ would probably span over more than two or three lines whereas ‘listed items’ should be more than a few words. (In other words, do not create an enumeration if an inline listing would clearly suffice.) The dividing line is a matter of taste, driven by the criteria of readability and avoidance of ambiguity.

Sub-enumeration. When enumerations result in page-crossing lists of items, it may well be advisable to sub-enumerate the list. A typical example of such list can be found in share purchase agreements (where between the effective date and completion of the transaction, a number of actions would not be permitted without the prior approval of the purchaser), or in joint venture agreements (listing the items that are subject to approval by the joint venture partners or a supervisory body). Business people who are supposed to work with such list feel uncomfortable as to whether all relevant matters are indeed listed or whether a desired action is subject to approval. Instead of one list of 25 to 30 items, it may be recommendable to subdivide the list into several topical ‘sub-lists’ (e.g. operational matters, IP-related resolutions, financial and tax matters, corporate structure-related decisions, employment and pension related matters and miscellaneous topics).

Many lawyers would produce an illegibly lengthy list of matters that are subject to approval, failing to introduce a logic in its order, and ending up in sometimes over 26 enumerated items. The reader of the contract is then stuck in interpreting whether or not something must be deemed to be covered by the enumeration.

Because of the limitations of indenting html texts, I insert the following example as picture: 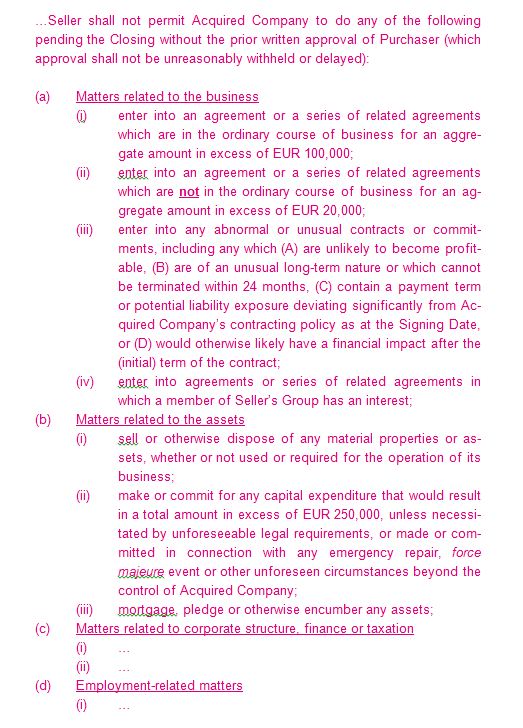 A salient detail in the above example (which is usually inserted in M&A transaction agreements where signing and closing are split) is that the model clauses used by a lawyer from a law firm will start the list with matters that would frustrate the purpose of a transaction fundamentally (and would inevitably constitute abusive behaviour by the seller); whilst the in-house legal counsel and business managers will probably not even consider taking those first listed actions. The latter group of persons actually use the laundry list in order to review if entering into a business contract or if maintenance investments in assets (capex) requires purchaser’s approval.

Semi-colons, commas or full stops. Enumerated paragraphs should be separated by semicolons. The last enumerated paragraph should end with a full stop, except if it ‘continues’ in a non-numbered closing paragraph (see below). A different approach is acceptable if there is no non-numbering closing paragraph (see below), provided that such approach is adopted consistently (i.e. all enumerated paragraphs should end with the full stop). For example, recitals may well be ended by a full stop (even though they are all deemed to be led in by the heading whereas:); definitions are increasingly often ended by a full stop; if you use a document assembly software application, enumerated clauses may be inserted or cut out, triggering a preference to end each clause with a full stop. Otherwise, enumerations, which are not divided into paragraphs, should be separated by commas.

The lead-in. It is a best practice rule to move as much text as possible from the enumerated paragraph into the lead-in of all enumerated paragraphs. This is also in order to prevent enumerated paragraphs starting with such emphasis on the continuation of the lead-in clause that it becomes irritating or formalistically repetitive. For example, if all the enumerations start with a verb in the infinitive, the word to is probably best placed in the lead-in phrase. For example, recitals should read as a story and provide basic background facts: the second and subsequent recitals should not start with whereas. It is better to place whereas above all the recitals.

5.1       As soon as practicable but in any event within 30 days following the Closing Date, Seller shall prepare:

(a)        a statement of financial position (balance sheet) of Acquired Company as of the Effective Date and a statement of comprehensive income (income statement) of Acquired Company for the 12-month period ending on the Effective Date, based on the Accounting Principles (the PreliminaryAccounts); and
(b)        a document setting out the EBIT, Cash and Cash Equivalents and Debt (the Purchase Price Elements), as derived from the Preliminary Accounts,
and deliver these documents to Purchaser.

Empty sections preceding subsections. Avoid using empty subsections. Occasionally, the subdivision of an article into sections forces the drafter into using an empty section; this happens when one of the sections consists of two or more subsections without a lead-in phrase. Such empty section can be avoided by using the caption to ‘fill’ the section, but if no captions are used elsewhere in the contract an empty paragraph might be the preferred solution. To illustrate this (with an empty section 3.2):

Alternatively, but suboptimally, the subsection can be placed into the ‘empty’ section and start with the number of that subsection, followed by a tab and the text of that subsection. An important disadvantage of this latter approach is that the indentation of the first subsection (including its subsequent paragraph lines) is visually different from the following ones. The previous example would result in the following layout (see in particular the word reduce in the second line of 3.2(a)) which is not correctly aligned:

Two sets of subsections. Sometimes, a section contains two series of enumerated subsections. Whilst it is better to avoid this phenomenon, a drafter should anyhow avoid confusion by using a different numbering style for each set (and probably be forced to also apply different indentations).

I hereby accept (or reconfirm my acceptance of) Weagree’ Terms of use, in which:
Accept
We use cookies to ensure that we give you the best experience on our website. If you continue to use this site we will assume that you are happy with it.We agree