Contract automation made faster. If only you could multitask, create your contracts much faster, and make model maintenance easier. That’s precisely what the new Weagree contract automation Wizard (version 7.0) does: making contract creation faster than ever before. We added a feature allowing lawyers to multitask and have made template insertion (even) easier.

Most of us create the best model clauses while drafting a contract for a specific transaction. Your ideal: to capture your creativity and be able to reuse it easily in future contracts!

Of course, you can already edit your contract text during the Q&A (with Weagree’s WYSIWYG editor) and indeed, the clause library is a powerful supporter. But with the new feature, users can feed back improvements to the template. ‘Weagree – accelerated contract drafting’ means easy multitasking: tailoring the specific transaction and improving your contract templates at the same time. 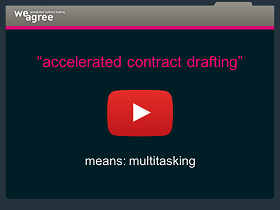 Watch our short 37-second video to learn how intuitive it is. As you’ll see, feedback can be prioritised. And with two clicks, the administrator goes straight to the relevant clause in the template to adopt the desired improvement. Your maintenance of model contracts has become more ‘collaborative’ and has never been as easy.

As of mid-February, your contract will be generated in just a few seconds – at the speed of the WYSIWYG editor. Whether it is an NDA or a 75-pages agreement, an LMA credit agreement or an extensive set of closing documents: after answering the Q&A, the Weagree Wizard will produce them as fast as it takes to download them. For large organisations and law firms, generating hundreds of contracts now takes just a few minutes.

We believe that every user should be able to insert model contracts, expand the clause library and modify contract clauses. Our ambition is to make Weagree so intuitive that general counsel, law firm partners and senior legal counsel can do it. This is why we’re introducing a distinction between frequently used functions and advanced features: with a simple switch, the advanced features can be filtered out, making Weagree’s template creation tool more intuitive.

With the arrival of legal tech, some law firms have seen the emergence of a new type of lawyer, the ‘legal engineer’. This may be the sad reality around contract automation solutions built on legacy technology. Not so in the case of Weagree. Rather, the so-called engineering part is a puzzle, making contract automation exciting and by no means technical. Our template insertion has now become easier by allowing an administrator to filter out those features that are used less frequently.

The new ‘simplifier’ button has further optimised our administrator training: the entire admin training programme takes two to three hours in total for millennials or some four to six hours for baby boomers (in each case with a bit of hands-on follow-up coaching).

https://weagree.com/wp-content/uploads/2017/03/logo-weagree.png 0 0 Weagree https://weagree.com/wp-content/uploads/2017/03/logo-weagree.png Weagree2018-01-31 14:02:442018-01-31 14:08:05100+ contracts in under two minutes, and multitasking
Adopting innovations: contract automation product lifecycle explained Failing to implement contract automation successfully? 9 best practices
This site uses a cookie. By continuing to browse the site, you agree with us to our use of it.we agree
Scroll to top