An impressive example of change management was Charles-Maurice de Talleyrand’s move from the past – his past – into the new world post-Vienna. It is fascinating to learn about one of France’s most influential persons during Europe’s hectic revolutionary time and project this on Legal Ops. 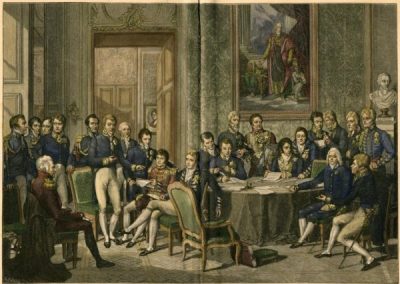 Talleyrand (1754-1838) has co-determined the course of history several times, each time quite dramatically. He was one of France’s most important diplomats during a hectic period of revolutions and war. After the defeat of Napoleon, during the Congress of Vienna (1814-1815), he managed to change the world’s perception of France as a defeated power towards being that of Europe’s historic powers.

It is impressive how Talleyrand made Europe’s kings, emperors and leading diplomats believe that the past – that he had co-created himself – was to be deterred and left behind. He depicted a roadmap into the future that convinced all of them to follow.

Much about the Congress of Vienna can be projected on nowadays developments (in society, in Europe, with Russia, on leadership, and on legal operations), and it fascinates. For example, don’t make your innovation a Polish land day (act!). For another example, “and the congress dances” – in other words, to progress, one should not dance but take steps forward.

Talleyrand, having served under four very distinct regimes (e.g. Louis XVI, Napoleon), can be considered opportunistic. But he knew what he was doing. He was able to think one step ahead, knew accurately where resistance was lurking, and how to avoid it successfully.

Know step-by-step what must happen

If you want to be successful in your change management efforts, it is key that you know accurately what you need to do. After all, resistance against innovation is typically due to a lack of clarity. Like Talleyrand, you need to lead your team with clear guidance.

Our guide addresses all aspects of your own revolution. Knowing step-by-step how to elevate your contracting processes to a higher level is crucial in changing an established way of working. Yes, there are still many frequently asked questions to be added (and your roadmap into Legal Ops will never be complete).

Depending on your organisations characteristic contracts and contracting processes, automating the contract lifecycles of your business may ultimately result in having automated each step of your contract cycle (highlighting the key milestones):

Can you think one step ahead?

Do you know all the steps of your roadmap towards a fully automated end-to-end contracting solution?

Let's reflect on it together