Cultural differences again. Signature blocks are to some extent an expression of legal culture: in the Netherlands, many companies have adopted a two-signature requirement and accordingly, two signature blocks are required. The signature blocks are not much more than a white space surrounded by the company name and signatory’s names, function and (not always) signing date and place. The signature is above a line. In France, the signatory is often required to hand-write the main purpose for signing (e.g. bon pour pouvoir for a power of attorney, bon pour acquiescement et renonciation express a toute voie de recours for a waiver and settlement).

Also the final part of a contract shows some differences in presentation between European style and U.S. style contracts: 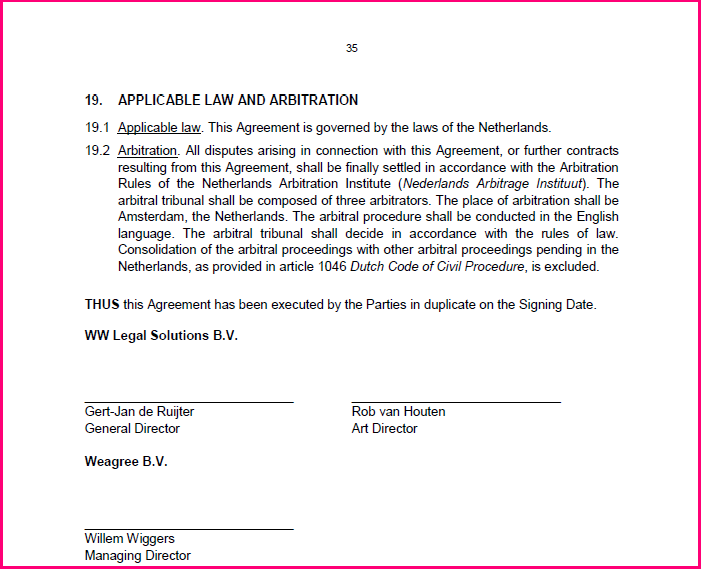 …and a US style variant: 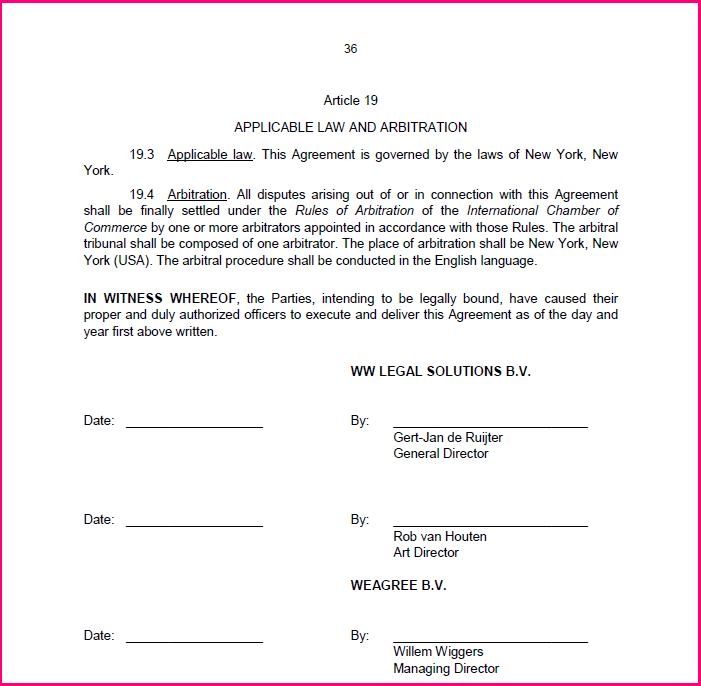 Side-by-side. Signature blocks in U.S. style contracts are usually aligned one above the other on the right-hand side of the page. To convey a sense of equality (and to save space), you can place them side by side.

THUS, this Agreement was executed on the date first above written.

A less accurate term for these concluding words of agreement, would be the testimonium clause: It is less accurate because in principle, no testimonium is required anymore since the decline of the Roman empire and Roman law, except that for deeds under English law and notarial deeds in European continental systems a witness would cosign as may be reflected in a clause.

Not! Its old-fashioned counterpart in the common law context is different:

IN WITNESS WHEREOF, the parties hereto, intending to be legally bound, have caused their proper and duly authorised officers to execute and deliver these presents as of the day and year first above written.

Why shouldn’t you use the latter example? Firstly, an assertion that the parties have caused the agreement to be executed by their duly authorised officers does not serve any purpose. The concept implicitly refers to the (ancient) theoretical viewpoint that a legal entity can be considered as a separate personality. However, a legal entity by its very nature can only enter into the agreement through representation by one or more natural persons. Secondly, you should not include a warranty in the concluding clause expressing that the executing natural person is authorised. If the signatory is not authorised to bind the party they allege to represent (and that party does not ratify such lack of authority), the law of mandate or agency[17] will impose liability on the unauthorised signatory for the full extent of the other party’s damages. Thirdly, the phrase intending to be legally bound is nonsense: it is not a prerequisite to the enforceability of a contract that the parties explicitly express such intention. Fourthly, the sentence contains a number of archaisms: IN WITNESS WHEREOF should, like WITNESSETH before the preamble, be dispensed with not only because contracts rarely need to be witnessed but also because it is old-fashioned. Finally, these presents is an outdated alternative for this agreement.

Bottom line. Altogether, you can dispense with the attestation clause, insofar as it extends beyond one single (visually separating) line of text. Anything it says, essentially states the obvious. The message should visually convey the same logical and natural transition as the parties block, the preamble title and the words of agreement.

The body of the agreementSchedules to contracts (annexes and exhibits)